Video games, while a relatively young medium, are very flexible. You see, much like a beloved book or a revered film, some games are able to reach past age limits and can appeal to all ages. At the same time, as an emerging medium, games are becoming a part of the world’s collective culture, whether that’s beneficial or not. Of course, you can’t just shove any title into your kids’ hands, because a game named God of War isn’t really something that sounds good for children. If you really want to get your kids into great games, then it’s time to let go of the Spy Kids games. 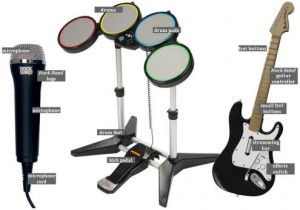 Music is an important part of life, and video games when you start to think about it. So when you want to join in when your kids start playing video games, why not start with the Rock Band series. Just imagine the scene; you and your kids in the living room playing “Through the Fire and Flames” and you, failing to catch up epically. These games can really bring a family together, and it’s really better to start the kids early. Since the game isn’t as popular as it used to be, you can be sure that there are a ton of deals on the whole series along with the peripherals. As an added bonus, they’re also selling a guitar designed to teach anyone the basics of guitar playing. 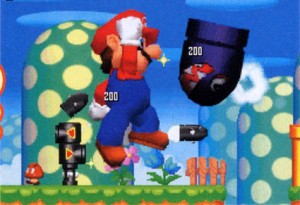 On the subject of cheaper gaming devices, did you know that the DS has plummeted in price because of its younger brother the 3DS? Well, if you’re living on a budget, but you want your kid to have some form of gaming, why not try the 3DS. Among the huge library of games, is a gem called Super Mario Brothers DS. At this point, you might already be familiar with the brothers, so if you want to get your kid into gaming, pick this title up. 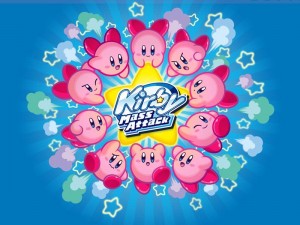 Before you read further into this article, take note that a lot of these titles are going to be from Nintendo. Back on subject, Kirby Mass Attack is a great title for kids, and it really maximizes the strength of the DS. In it, you play the adorable little pink eating machine named Kirby. The premise is that Kirby has been split up into tiny little pieces of himself, and his main objective is to save every mini-Kirby throughout each an ever level. 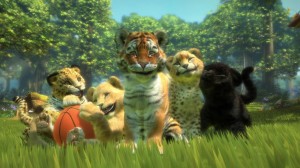 For a long while Kinectimals was ridiculed because of its very casual nature. However, over time, it has proven to be one of the cutest games ever. Kinectimals makes sure to use all the power of the Kinect on the Xbox 360, and the result is an almost fully interactive gameplay experience for your child. Besides, the animals start to grow on you after a while.

In this game you get to create race tracks and you get to race on them. Of course, that would be boring on its own, so instead of just track creation, you’re treated to a ton of puzzles and brain teasers that will get in your way. The little mini-challenges really makes the difference when you’re playing, because it breaks up the action into bearable little tid-bits which really complement each other well.

There have been so many iterations of this series that it’s hard to keep track of all of them. However, the many different forms of this game are there for a reason; it’s because the game is so good. Classified as a hard puzzler, this title will really exercise your kid’s brain as it doesn’t give much mercy. That isn’t to say this is an impossible game though, because with each success comes a sense of accomplishment which every kid needs every once in a while.

4. The Lego Series of Any Movie 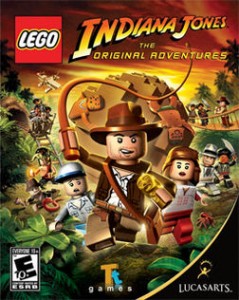 Lego has come a long way from being just a brick game which uses a kid’s imagination. Of course, it wouldn’t be a bad idea to buy your kid their own sets of Lego because those things are still awesome anyway. Most of the Lego video games concentrate mostly on movie adaptations, and in that respect, they do a lot better than the triple A titles that get churned out every year. Most of them are pretty good, but if you want to try the very best, go for the Harry Potter titles and the Indiana Jones game. 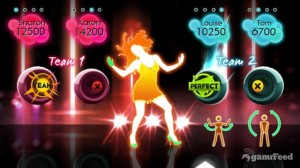 Does your kid love dancing? Well, if they do, Just Dance 2 is the best game to scratch that itch. Featuring a great control system through the use of the Kinect or the PS3’s Move peripherals, this game boasts some pretty fantastic tracks, along with good gameplay. You can also make a bit of a fool of yourself if you want to, as it is always fun to watch adults embarrass themselves playing a game that is made for a younger generation. 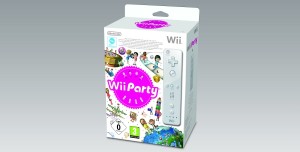 The Wii was probable one of the best consoles to ever hit shelves, and that’s because it appealed to everyone in the family. Boasting simplistic controls that anyone could pick up, it had its share of family oriented titles. Wii Party is one of those titles, and it still stands as one of the best games you can try with your child. Basically, you are tasked with playing several different mini-games within the main game.

1. The Many different Toddler Titles on the iOS and the Android 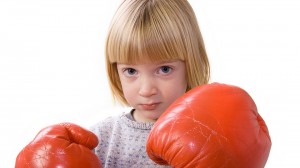 One great big advantage to having such an advanced smart phone is that it can often play great games. From simple story telling apps, to full on game experiences, the smart phone is fast becoming a child friendly gaming platform. At the same time, almost everyone owns one of these things, so if you can’t afford the full suite of accessories and games consoles offer, this is one of the best alternatives to turn to.