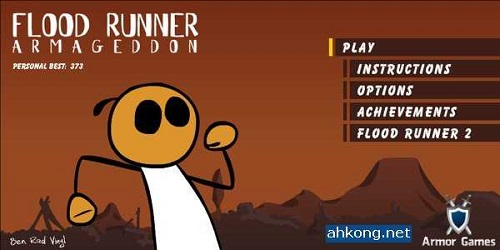 Racing through realms of land, sea and sky, you utilise the power of flight, super human strength and the ability to withstand extended periods of being on fire to traverse a myriad of obstacles, enemies and natural disasters.

Flood Runner Armageddon is one of the most over the top speed runner games you are likely to have ever played, featuring a protagonist who despite his simple appearance can dispatch sea monsters or giant wasps and ride dragons, all whilst being chased by a raging wall of lava.

Logically then there’s a lot more to keep your eye on in this game than in most of its contemporaries. Obviously, you need to concentrate on making your way through the levels using the left and right keys and jumping, but there’s also a “glide bar” letting you know how long you can continue defying gravity and a health bar detailing just how much of toll each tough day at the office is having on our main character.

In addition, you have to look out for the usual power-ups and special abilities so often present in this kind of game, and in certain scenarios execute a series of key commands in order to deliver a knockout blow to a shark or giant squid. All of this brings a degree of complexity to the game that ensures you can’t just button-bash your way to victory, but doesn’t infringe upon your gaming experience or prove annoying.

In terms of the punishment you can take, Flood Runner Armageddon is a little more forgiving than most speed runner games, a good feature for those who are easily frustrated by this sort of thing. There are also multiple routes through each level, ensuring that each time you play you can expect a different experience.

On the other hand, the difficulty levels are remarkably inconsistent, and it’s hard to gauge any real sense of progress as you advance. Don’t get me wrong, it’s perfectly playable, but after a while all the levels begin to just blend into each other and your experience can become somewhat monotone.

Some might criticize the cartoonish graphics, and as I hinted at earlier, the main character’s design seems a little lazy. Then again speed runner games are supposed to be gimmicky / tongue in cheek, and a bland appearance might help superhuman-wannabe players relate to the protagonist.

By far the biggest issue (and it isn’t all that big) with this game is the presence of one or two bugs that can occasionally interfere with gameplay and cause you to die through no fault of your own, which is immensely frustrating, but mercifully quite rare.

There is no set way to go about completing the game, part of the fun is working out your own way of staying alive, and the controls are not that difficult to master. That being said, if you are struggling and want an indication of how it should be done, there are plenty of YouTube walkthroughs or replays out there to help you on your way.

Veteran speed runner gamers won’t look kindly on this sort of thing, so don’t expect a great reception when you post your ill-gotten scores for your friends to see.

Frankly this game is easy / well designed enough for you not to need cheats to enjoy it. Nonetheless, if you want to make that leap from demi-god to full blown Zeus, there are hacked versions of the game available for you to play through your Android’s internet browser.

These versions allow you to tamper with the fundamental game mechanics, facilitating the instantaneous use of a protective shield, automatic gliding and changes to gravity levels. They do nothing however to address bugs, and may in fact exacerbate them.